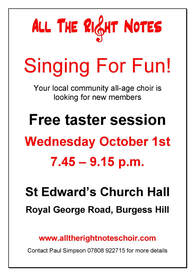 All the Right Notes was set up in 2012 after members of St. John’s Choir in Burgess Hill wanted to continue singing under Paul Simpson’s leadership following his departure as Director of Music at the end of 2011. Along with other local friends, the choir began rehearsals at the old Royal British Legion hall in Burgess Hill. Members of Paul’s new church choir joined as well as pupils and parents from St. Wilfrid’s School, where he assisted with the music.

The choir went public that Christmas, singing at Rushfields Garden Centre, St. Wilfrid’s School and as part of the Light Up Hassocks event. This led to an influx of numbers and after the British Legion ceased being a viable base, we moved to St. Edward’s Church Hall, still in Burgess Hill. The choir continued to grow, and from 2013 to 2016, we provided a Christmas concert at St. Edward’s, as well as joining in Light Up Hassocks, and singing carols at B&Q. In the summers, we were invited to be part of the Burgess Hill Town Festival, performing in successive years at Cypress Hall, St. John’s Church and the late and lamented Martlets Hall. For the last couple of years we were joined by Tim Nail on the piano, who has played for most of our subsequent concerts (Phillip Sear kindly stepping in when he wasn’t available).

We had outgrown the available space at St. Edward’s, and in September 2017 moved to St. Francis Hall in Hassocks. Together with a publicity drive, this led to further new members joining, and we began hiring the United Reformed Church with both Christmas and Summer concerts taking place there ever since. We extended the band further with Michael Stefan Wood joining us on bass guitar.

In the autumn of 2019, we were approached by members of another local choir which was no longer running, and gained over a dozen new singers. This enhanced choir – with more than 50 members – sang at Christmas 2019 and was continuing when COVID hit in March 2020.

During the pandemic, the choir kept running with rehearsals on Zoom and, in the rare breaks from lockdown, in person. A Christmas sing through was managed in December 2020, and we mixed online and in-person rehearsals through the spring and summer of 2021, moving to the URC where we could space ourselves apart more easily. This culminated in a very socially distanced concert in July 2021. The autumn allowed more chances to practise together, and we put on a full concert – albeit with the audience masked, and seated further apart than normal – for Christmas 2021. For this, we were joined for the first time by Rod Smith on saxophone. Unfortunately four days later, Paul had a major heart attack, and the choir went into an extended break until his surgery in June 2022 before returning in September.

The social side of the choir has been important from the start: there are two regular get togethers annually, a Christmas meal and a summer barbeque. During COVID, these were replaced by quizzes, initially fortnightly, and later monthly.

​Rehearsals for the Christmas 2022 concert have now begun with the concert booked for 7th December at the URC.​